Oliver Jonischkeit and Sascha Jussen visited the busiest helicopter base of the Spanish Army, North of the capital Madrid. Here they learned what the based and detached flying units are training for and how the execute their daily missions

With nearly 40 permanently assigned helicopters of various types and with various tasks, Colmenar Viejo is not only the headquarter of the Spanish Army Aviation (Fuerzas Aeromóviles del Ejército de Tierra, FAMET) but also its most important „air base“ in spite of having just a rather short runway of just 524 metres length. The name of the nearby town Colmenar Viejo refers to the legend of an old man (El Viejo) who owned a large bee house some centuries ago – while the army base has become the new „bee house“, with CH-47s, AS.332s, EC.135s and even still a handful of UH-1s are flying here almost every working day. Colemenar Viejo airbase was named after Coronel Maté. He was one of the first Helicopter Unit Commanders when the Army Aviation was founded, and also a strong supporter for the development of the Night Vision Goggles (NVG) flights in Spain 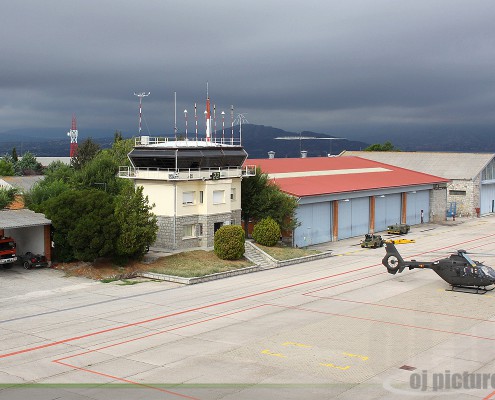 “Coronel Mate” airbase is the place to be for every new Spanish Army Aviator, as the base houses the FAMET training center (Centro de Enseñanza de Helicópteros de FAMET, CEFAMET). Flying some 10 EC-135T2 and T2+ versions CEFAMET receives pilot candidates as soon as they have graduated the elementary flying course on behalf of the Spanish Air Force. The training phase with the Spanish Air Force, which includes the basic training, is with EC120 Colibri and S76. That takes place in the Air Force Helicopter School in Armilla, Granada. According to the pilot training course, all the pilot candidates that attend the pilot course are already full commissioned officers or non-commissioned officers (NCO), already graduated from the military academy. They are no longer cadets. This system is changing now and the future NCO,s will be trained as pilots during the academy period. The whole pilot training course comprises around 200 flight hours (including the phase with the Air Force and CEFAMET). After graduating as a pilot, the officer or NCO is posted to one of the Helicopter Battalions and is there when he/she takes the type rating course for the specified helicopter available at that unit.

Also operating from Colmenar are the four EC.135 of the Emergency Helicopter Batalion II (Batallón de Helicópteros de Emergencia II, BHELEME II), which are permanently detached here from their homebase Bétera near Valencia. This unit and the air force unit Grupo 43 in Torrejon constitute AGRUMEDA, the flying component of the multi-service Unidad Militar de Emergencias (UME). The UME is to provide relief support for any kind of natural disaster that may happen in the whole Country. At least one helicopter and one aircrew consisting of two pilots is available to operate within two hours after reveiving an order at any given time.

Transport Helicopter Battalion V (Batallón de Helicópteros de Transporte V, BHELTRA V) operates the biggest and heaviest helicopter of the FAMET – the venerable CH-47 Chinook. 19 examples of this two-rotor helicopters were delivered as CH-47C in the 1970s. Between the 1990’s and 2001 the CH-47C had been converted to the more capable D-version with improved engines and advanced avionics, of which 17 are still flying in the various roles BHELTRA V has been assigned to: Transport of personnel, armament and heavy equipment of up to 10.5 tons weight, insertion und extraction of special forces, combat search and rescue (CSAR) as well as limited close air support. The motto „Detras De Nadie“ of BHELTRA V which means „behind no one“ is taken very seriously by both aircrew and groundcrew of the unit. They are very proud about this, not only because being the first European country operating the Chinook and having much experience on the type but also because of their types of operations. Spanish Chinooks and their crews have proved their value in various international missions which also included operations in Afghanistan until 2013.

The type rating for the Cougar is given in BTRANS for example.
The Batallón de Transmisiones de las FAMET (BTRANS) is operating AS-332 Super Puma in VIP configuration and AS-532 Cougar transport helicopters.

Also based at Colmenar is the Helicopter Maintenance Center (Parque y Centro de Mantenimiento de Helicopteros, PCMHEL). This unit is the highest maintenance echelon for all the helicopters in the FAMET. Maintenance is according to US.Army standard procedures as much as possible. PCMHEL comprises specific branches for each type of helicopter as well was specific like avionics, hydraulics or painting. The main workshop is responsibly for direct support of the flying untits with the final technical tests and flight tests, while the other workshops operate in support of the main workshop.

Active Helicopters based in Colmenar